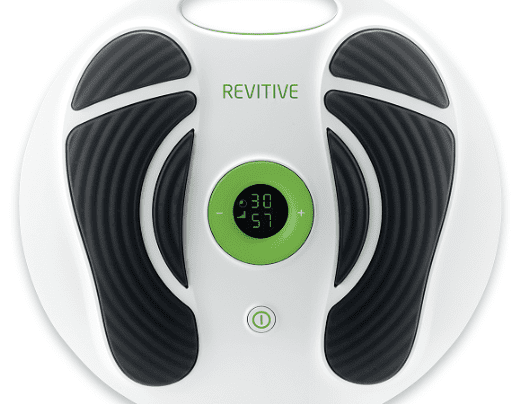 What is a circulation booster?

The circulation boosters, of which the most well known brand is Revitive, are a range of devices that are claimed to improve the circulation. The marketing of these products is mostly via testimonials and celebrity endorsements. There is very little or no actual scientific evidence that they help the circulation.

These circulation boosters range of devices have a platform that you rest the foot on and that either vibrates or provides a slight electrical stimulus, the result being that the muscles contract. With this muscle contraction blood is pumped, so yes there will be a temporary increase in blood flow to the area because of this. As soon as the device the turned off or the foot taken off the device, the stimulated muscle contraction stops and the blood flow goes back to where it was beforehand.

Going for a walk for the same amount of time you could have spent on the device will do substantially more for the circulation. The local blood flow from the muscle contraction of walking will do more good that the stimulated muscle contraction from a device. The walking also stimulates an increase in cardiac output to supply blood flow to the exercising muscles and this substantially increases the benefits of walking. The circulation boosters to nothing to stimulate cardiac output.

There has been research published on these devices that have measured changes in some physiological parameters or variables while using the device, but no research has shown that they do anything to improve the circulation, especially over the long term. If they were capable of improving the circulation, then all vascular surgeons would be recommending these devices to their patients. There is a reason that they don’t. In the past the manufacturers of these devices have found themselves in trouble with a number of regulatory and advertising bodies. (And one of those companies even threatened me with legal action simply becasue I posted a link to one of the decisions made by an advertising standards authority – says a lot about them that they would do that).

So why do so many testimonials that claim the devices are so good? Testimonials are not data and any medical device that relies on testimonials rather than published scientific evidence from well controlled trials should be treated with a red flag. People may feel better after using these devices for any number of reasons, including the placebo effect. Some people with pains in the feet and legs may find some relief from using those circulation booster devices as the muscle stimulation provides a neurological or sensory input that may help with their symptoms. That has nothing to do with improving the circulation. Nothing wrong with those kinds of effects and if you find that it helps you, then good. However, do yourself a favor and go out for a walk and get some real exercise.

Can adults get Calcaneal Apophysitis?

Can adults have Severs disease?